Bullseye is back in 2021 as part of Alan Carr’s Epic Gameshow Series 2!

Want to appear on Epic Bullseye? Contestant Applications are now open via: http://bit.ly/epicgameshowseries2. 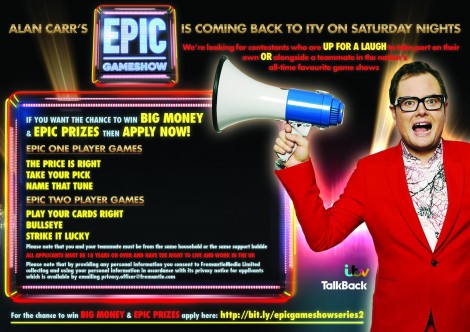 Leading independent distributor DRG have signed an agreement with Bullseye creator and owner, Andrew Wood to take the format worldwide.

The deal was brokered by Andrea Jackson, MD Acquisitions at DRG who said ‘With the current trend of bringing back classic gameshow formats, DRG are confident that there is a strong appetite for Bullseye across the world.  We look forward to finding the best international partners for the format and hitting the global target.’

The President of The Gurin Company, Phil Gurin who was behind the NBC version of the Weakest Link, met with Andrew Wood in London and they signed the deal. Both Phil and Andrew are keen to see Bullseye on American television. This will include the upgraded Bullseye format with the new additional optional end game where the contestants can try and win, ‘Bully’s Million Dollar Jackpot’.