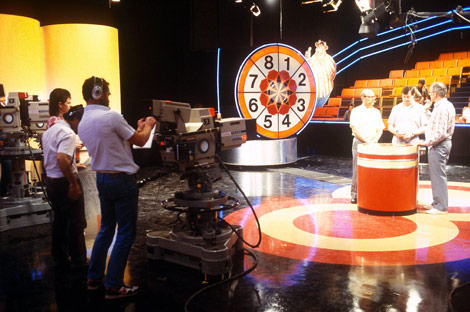 I spent months in the late seventies analysing game shows, and specifically what it was that made them so successful. What was it that made them such compelling viewing to so many people, and what aspects and characteristics did they possess that created such a mass appeal amongst both men and women of all ages? Was it the attraction of winning money and glamorous star prizes, or the fun of the competition and participation? What were the strengths of game shows and how were they constructed that made them such a cornerstone of both British television and for the British viewing public? I was looking for the right components that would combine to make a new style of game show, one which had never been done before, and one which would at the same time be both dynamic and distinctive and yet natural and welcoming; one that seemed to be both brand new and yet had all the qualities of an old friend at the same time.

I was convinced that the written format was at the heart of the show and it would be the base on which the show would be built. The format had to be strong, one which could stand the test of time, whilst being both practical and affordable and it would place the contestants at the heart of the show and the host would be the conductor, leading the way. And thus in 1980 the Bullseye format was born, going on to achieve not just unparalleled success, but it would be come one of the most treasured and loved shows on British television.

The winning characteristic of Bullseye is that it is filled with elements that the public love, both in game shows and in their everyday life, and as a result it engages them in a way that no other game shows manage. The most popular game show elements are present, namely question and answer rounds, monetary and prize rewards and competition between contestants, but are combined with sports and gambling – two of the publics most cherished pastimes – to maximize the shows fun and feel good factor and to increase the given possibilities in any given show. Whilst the contestants are the stars on the screen, the viewers feel as if they are a part of the show every bit as much and this inclusiveness is what gives Bullseye its mass appeal.

The next step was to create a half hour show around these aspects, placing the shows strength and identity at the foreground whilst ensuring it is both captivating viewing and easy to understand and play. Three teams of two would compete for money and prizes – the ‘knower’ would answer questions on general knowledge and specialist subjects whilst the other, ‘the thrower’ would be the darts thrower – and the viewers at home would be free to join in. The question and answer rounds would be particularly effective at involving the studio audience and the viewers at home and added to the shows universal appeal; the viewers at home, free from the high-pressure setting of the television studio, often proving their intellectual prowess before the on-screen contestants. The ‘knowers and the throwers’ would then have to compete against the other teams with the end of show gamble for ‘Bully’s Mystery Star Prize’ completing the shows dexterity and flexibility. The combination of these aspects would make the format instantly accessible and would lend the show an air of unpredictability were you could never predict who would win, and it would be this recipe which would make ‘the Bullseye format’ such a hit.

The success of the format is evidenced by its longstanding success as Bullseye ran for 15 series over the entire ITV network in the UK from 1981 to 1995 presented by Jim Bowen and referee Tony Green, winning a special place in the hearts of the nation and becoming a Sunday evening television institution. A sixteenth series was declined as the conditions demanded by the network were unacceptable and would not have been in the interests of either Bullseye or its fans yet the show has lost none of its appeal or status.

The shows popularity remains undiminished and Bullseye has achieved an unbroken run on television for 39 years attracting audiences of over 19.8 million viewers. Now in it’s 39th year repeats of the show can still be seen on Challenge TV on the Sky platform in the UK and continues to prove the shows unwavering appeal which extends much further than its cult status, and its reputation as an unbeatable family show was to grow with the turn of the millennium.

In 2005 the ITV Network invited Andrew to bring Bullseye back to the network as part of ITV’s Game Show Marathon Series 1 hosted by Ant and Dec.

Of the seven shows taking part in the marathon Bullseye was the highest rated game show on the series attracting 8.6 million viewers. The other 6 shows in the series were; The Price is Right, Take Your Pick, The Golden Shot, Sale of the Century, Play Your Cards Right and Family Fortunes.

In the spring of 2006, Granada Productions produced a new series of Bullseye for Challenge TV presented by Dave Spikey (of Phoenix Night’s fame) and referee Tony Green. The shows format remained the same and the series went on the break all Challenge TV viewing figures with a 200% increase in average Challenge channel ratings. Bullseye was the top performer on the channel across the year, beating its nearest rival, Classic Who Wants to be a Millionaire, by a massive 63% in ratings volume. It was also the first time in the history of Challenge that they had a higher market share than Sky One. In 2007 Bullseye was once again invited back by the ITV Network to be one of the 8 game shows on ITV’s Game Show Marathon series 2 hosted by Vernon Kay.

The seven other shows in the series were, The Price is Right, Blockbusters, Blankety Blank, The Golden Shot, Name that Tune, Mr & Mrs and Play Your Cards Right. For the second time Bullseye had the highest ratings of all 8 shows in the Marathon and when you consider the fact that Bullseye was transmitted on Cup Final Day when half of London and half of Manchester were in the pub celebrating or commiserating the result of the Cup Final – Bullseye still came out on top.

Most recently in 2011 Bullseye featured in Challenge TV’s Marathon Game Show Days that ran from Monday 26th December 2011 until Saturday 31st December 2011. Bullseye once again came out the clear winner beating all the other shows viewing figures as seen by the results below;

Monday 26th December ~ Who Wants to be a Millionaire Volume: 64K

Bullseye had the greatest amount of average viewers from all six shows over the six days, illustrating Bullseye’s continued and deserved place as the king of British game shows and cementing its iconic status and eternal popularity with the Great British public.